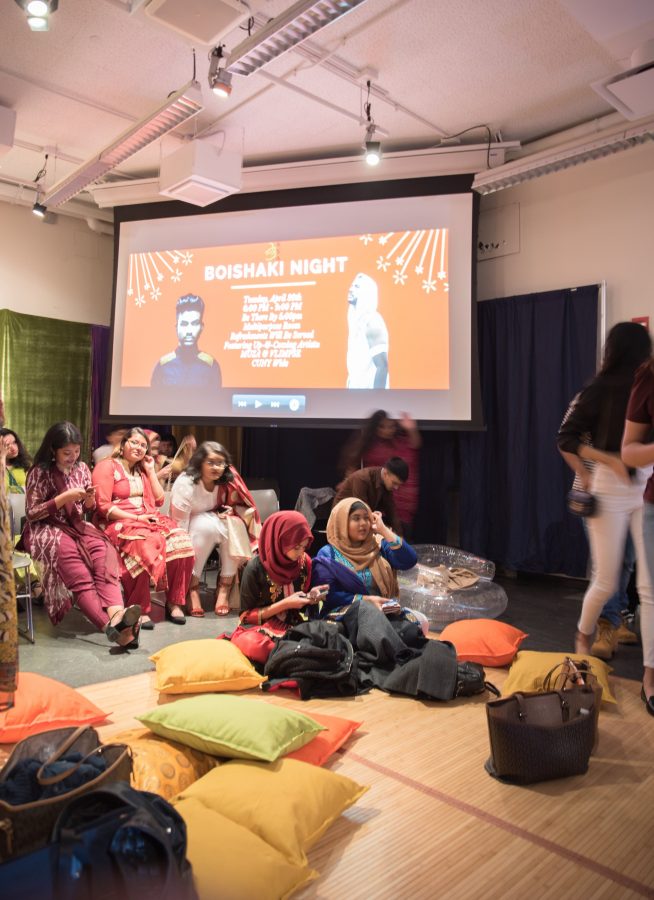 The holiday is celebrated with processions, fairs and quality family time.

BSA brought all the vibrancy and fun to the Baruch community and invited outside students across the CUNY system to celebrate the new year.

BSA Vice President Sanzida Begum said she was happy with the turnout this year and tried to bring as much culture and Bengali traditions as possible to Baruch.

“It’s sort of like a fair, a parade; in Bangladesh we did a parade in the capitol,” Begum said.

BSA President Syeda Rahman said this is the first time they had a CUNY-wide event so there were many challenges they faced but she is glad that the night went smoothly.

“This is the first time we had a CUNY-wide event and we didn’t know the process so that kind of took awhile but it was still a good time,” Rahman said.

“We thought it will be fun to be very colorful because it is kind of like a spring celebration, just being more expressive.”

Rahman emphasized the diversity at Baruch and how the audience is not only Bengali people but also a mix of cultures, so she appreciates how everyone can come together to celebrate a new year.

“We always get a huge turnout [of] people that aren’t Bengali,” Rahman said. “We really appreciate that.”

BSA Chair of Events Fahim Alam Shakie mentioned how he wanted to share the festivities with the Baruch family and how the energy at the event was amazing.

“The turnout was amazing; we have over 200 people in the room right now and everyone is jamming, dancing, people are cheering on and everyone is loving the music that is live right now,” Shakie said during the event.

“People from all ethnicities are dancing together — that’s the goal.”

Shakie pointed out that his favorite part was dancing with the BSA team who perform both cultural and modern dances from traditional Bengali music to jamming party music.

He also emphasized that BSA wanted to bring upcoming and new local artists in New York City to support the local artists.

“We want to represent the local artists in New York City,” Shakie said.

“That’s why we brought them here, we want to keep it local; the performers were amazing.”

BSA Chair of Marketing Debby Debnath said she is so grateful that the event was so successful because BSA put so much effort and time into this and started planning two months ago.

“We had a great teacher this semester and her name is Ayesha, I am grateful for her,” said Debnath.

“If it wasn’t for her, I don’t think the dances would be this successful.”

Chair of Choreography Ayesha Abedin revealed that they have been rehearsing for a month now and have been preparing nonstop for tonight.

“Since it is Bengali new year, we specifically wanted Bengali songs; we took some from TV commercials and movie songs,” Abedin said.

“We had a classical Bengali song which was the second song. We have a lot of colors, a lot of fun and we believe in loud music.”