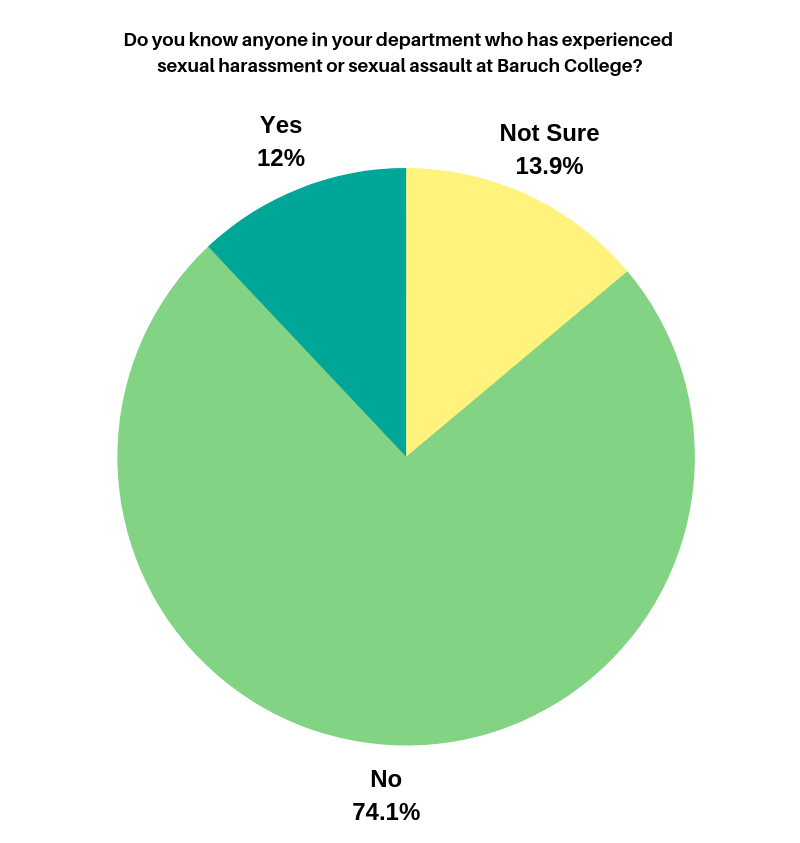 Forty-three percent of people who completed the survey said the opposite, that their respective department does provide training on sexual misconduct. A little over 19 percent of responders said they weren’t sure.

Another question in the survey asked about whether the department makes it easy or comfortable to come forward about sexual harassment or sexual assault, to which almost 58 percent of people said yes but about 7 percent said no. The rest said they were unsure.

Another question inquired about whether respondents knew anyone in their department who has experienced sexual harassment or assault at Baruch, to which 12 percent said yes, 74 percent said no and about 14 percent said not sure.

The survey provided an optional space for responders to write their unrestricted thoughts on the topic of sexual misconduct at Baruch. Due to space constraints, The Ticker is only publishing a few of the comments in print, but the full list of recorded comments is online. Click here for the full, unedited answers.

One responder called the environment a “boys club.” The response is printed in full here: “There was a man who harassed young female student aids, after complaining for over a year he was moved around then promoted and now he is enjoying his retirement. They even gave him a big retirement party!!! Most of the male administrative staff have no idea what constitute harassment, especially those who are over 40. The managers and directors also makes it difficult for student employees to come forward and complaint. Student employees are not encourage to say something for years, this is changing a little by the ‘ME TOO’ movement, albeit a little late. Even during president Matt Goldstein era, faculty/department chairs were promoted to even with pending accusations sexual harassment and assault against them. IT HAS BEEN and STILL IS a BOYS CLUB.”

Another survey-taker said that “staff and faculty regularly engage in misogynistic conversations or statements, demean womxn employees (especially if they are perceived to be young) and engage in gaslighting and other tactics to avoid taking responsibility for toxic work environments.” And another responder said that they feel Baruch and their department take sexual misconduct seriously but are limited “by the administrators’ understanding of systemic sexism and misogyny.”

One other responder said the following: “Senior female colleagues in the department have informally mentioned (to me) previous instances of inappropriate comments by certain senior department personnel.”

The survey, which had 19 questions, asked professors and administration specific questions about their experiences with sexual harassment and sexual assault on campus. All of the questions were mandatory except one, which asked responders to share their name if they felt comfortable with The Ticker reaching out to them for further discussions.

Using the online directories for every department at Baruch, The Ticker compiled a list of 2,003 emails corresponding to faculty, staff and administration and created the survey using Qualtrics software. Of the 2,003 emails, four emails failed and 138 bounced back. Over the two weeks that the survey remained open, 271 different responses were recorded.

Upon emailing the survey out, dozens of professors emailed back, offering feedback or asking for clarification on what the results will be used for. Originally, there were two questions that asked recipients to give a grade to Baruch Title IX Coordinator Mona Jha and Executive Director of Human Resources Andrea Caviness. The grade ranged from A to F and asked recipients to evaluate their performance when it came to dealing with sexual harassment or sexual assault.

Multiple faculty members indicated in an email that Caviness is a new hire and that there is insufficient information on how to grade her.

As a result of the feedback, the question about Caviness’ performance was removed entirely and the question for Jha’s performance was made optional. But the results of both questions — including the ones that had been submitted prior to these changes — were not counted in the final results and will not be included in current or further reporting.

Upon the survey’s close, The Ticker organized and interpreted the data collected. The results did not include an email or any distinctly identifying information of any individual who has filled out the survey, unless an individual chose to include their name at the end.

Due to space constraints, The Ticker is only publishing a few of the comments in print, but the full list of recorded comments is online. Click here for the full, unedited answers.