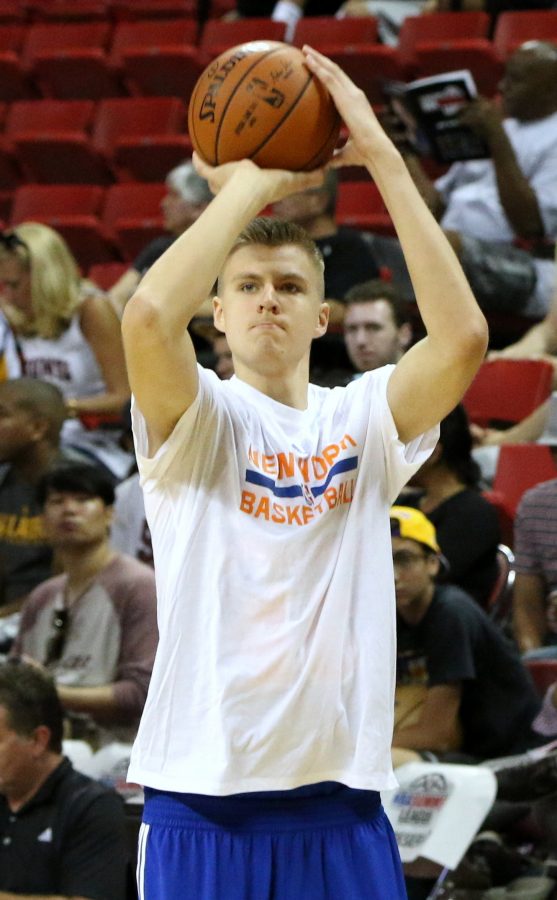 The trade deadline came a week ahead of schedule for the New York Knicks, as they facilitated the first blockbuster trade of the 2018-2019 NBA season. On Jan. 31, less than 24 hours after losing to the Dallas Mavericks at home 114-90, the Knicks traded their potential franchise centerpiece, Kristaps Porzingis, along with forwards Courtney Lee, Tim Hardaway Jr. and Trey Burke to the Mavericks in exchange for Dennis Smith Jr., Wesley Matthews, DeAndre Jordan and two future first-round draft picks.

The deal came after Porzingis met with Knicks management that same day and left franchise officials with the impression that he wanted to be traded. The 23-year-old, 7-foot-3-inch Latvian, whom the Knicks selected with the fourth overall pick in the 2015 NBA Draft, was the key piece of the Knicks’ rebuild for the future. Porzingis, who made his first All-Star team last season, tore his anterior cruciate ligament on Feb. 6, 2018, during a home game against the Milwaukee Bucks.

The injury caused Porzingis to miss the All-Star Game and there was no definitive timetable for his recovery, but he was likely to miss the entire 2018-2019 season as a result. Porzingis was supposed to be the franchise’s next superstar after a tumultuous breakup with longtime Knicks star and fan favorite, Carmelo Anthony.

He was well on his way to becoming that, as he averaged 22.7 points per game, 6.6 rebounds per game and 2.4 blocks per game. He was also a very skilled and reliable three-point shooter, as he shot 39.5 percent from beyond the arc last season. Given his unique skill set for his height, Porzingis was dubbed the “unicorn.”

But Porzingis’ time with the Knicks, especially during his injury rehab, was no fairy tale. In fact, it was the complete opposite. He failed to show up during then Knicks president of basketball operations Phil Jackson’s exit meeting after the 2016-2017 season and had several misunderstandings and clashes with new head coach David Fizdale. He was also noticeably frustrated with the Knicks’ constant losing and future focus. It was clear that the player who was once hailed as the next savior of the Knicks no longer wanted anything to do with them.

Porzingis talked with Knicks management about the state of the franchise and his future with the team. Porzingis and his brother, Janis Porzingis, who is also his agent, expressed their frustration with the franchise’s losing ways, past dysfunction on the team and uncertainty over creating a sustainable, successful organization.

The young Latvian wunderkind, who silenced all the critics with his outstanding play over the past three years, sadly left the Knicks on a very sour note. During his three seasons with the Knicks, Porzingis played in 186 games and averaged 17.8 points, 7.1 rebounds, and 2.0 blocks. He will get a fresh start in Dallas, playing with Slovenian rookie sensation, Luka Doncic, and being teammates with his idol, Dirk Nowitzki.

Lee, 33, is due $12.8 million next season. He has played sparingly this season due to the Knicks’ youth movement, but averaged 12.0 points per game as a starter last season.

Burke, who has resurrected his career with the Knicks after bouncing around several teams, is averaging 11.8 points per game this season.

By trading Hardaway and Lee, the Knicks cleared an additional $31 million of salaries and currently have $74.6 million in cap space to spend this offseason. That amount of money is enough to sign two marquee free agents to maximum contracts.

Smith Jr., who averaged 12.9 points and 4.3 assists this season, was displeased with some of head coach Rick Carlisle’s tough coaching tactics and that he was playing primarily off the ball due to Doncic’s emergence as an All-Star-caliber playmaker.

Members of the Knicks’ front office were enamored with Smith ahead of the 2017 NBA Draft, the Knicks instead selected Frank Ntilikina with the No. 8 pick, and many fans expressed their displeasure of passing on Smith. Dallas selected Smith with the very next pick in that draft, and the 21-year-old has shown signs of growth and flashiness during his year-and-a-half with the Mavericks. He even got praise from superstar LeBron James last season, although many believed that it was a shot at the Knicks for selecting Ntilikina or the fact that Jackson, a well-known adversary of James, was still in charge.

Matthews is averaging 13.1 points in 44 starts for the Mavericks this season, his 10th in the league.Jordan and Matthews will likely be bought out by the Knicks, in order to create more cap room and flexibility. If not, they will likely not be part of New York’s roster after this season, as they both have expiring contracts at the end of the season.

The seven-player deal sent shockwaves around the league, but it was a bold move by new Knicks president of basketball operations, Scott Perry. The Knicks’ franchise star was unhappy with the team and made it clear that he wanted out. This decreases any likelihood of marquee free agents willing to play for the Knicks, which is why Perry had to make this deal.

As for the Knicks’ trade deadline agenda, there are likely not finished. New York center Enes Kanter, who has seen his playing time fade into thin air, will almost certainly be traded. He did get to play during the Knicks’ loss against the Mavericks and even kissed the Knicks logo at center court when he checked in. Kanter is making $18.6 million this season, the final one in his four-year, $70 million contract he signed back in 2015 with the Oklahoma City Thunder.

Once again, the Knicks are left without a true franchise centerpiece, but they hope that this blockbuster trade will pay off this summer. Given the Knicks’ checkered history of poor spending during free agency, New York management is rolling the dice and hoping that they can give their loyal and passionate fanbase something to cheer about for the future.