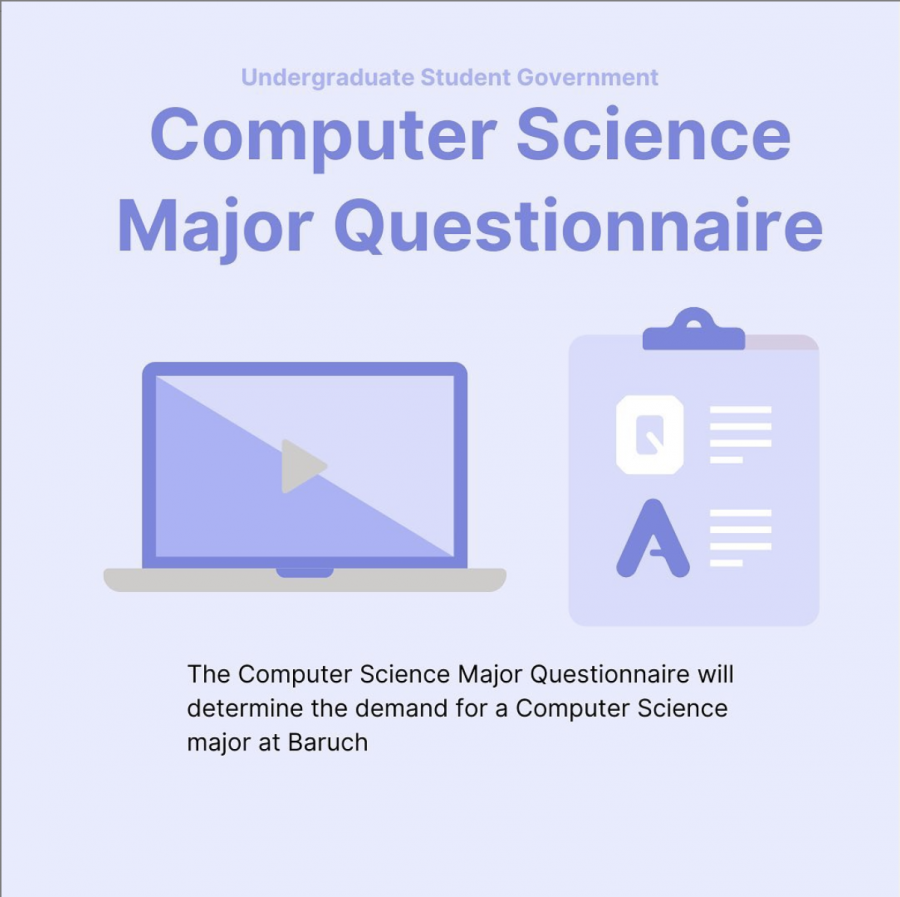 Baruch College’s Undergraduate Student Government has put out a survey to explore the possibility of a potential new major added to the computer science curriculum, which will close on Nov. 18.

The survey comes after an increase of pressure from Baruch students to have more options for technology majors.

Rep. Sen. Tomasz Horczak is spearheading the campaign to determine if there is sufficient demand for the major.

He said he originally hoped to work with department chairs. However, he was quickly met with pushback citing lack of interest.

“So, and then the reason we went to do the survey was just to show them like, ‘Hey there, there is actual interest for this major, even though you may say there isn’t,’” Horczak explained.

Amr Alsabahi, president of the Baruch Association for Information Systems, a club dedicated to the advancement of information systems, said he has high hopes that the survey is successful in raising awareness of a much-needed computer science major.

“I was pleased to hear about this initiative, and I think it is a long-awaited major at Baruch College . . . Having a computer science degree would help many Baruch College students strengthen their technical skills and be well-prepared for the real world,” Alsabahi said.

Michael McManus, a Baruch computer information systems major who graduated in 2019, could not have agreed more. He had been discussing the need for a computer science major in Baruch forums as early as last year.

McManus explained that when he graduated, he was surprised to see that he had trouble passing his first-round interviews due to the limitations of his CIS degree.

“It was definitely a reality check, because even after all that grinding to bolster my resume, I still had zero knowledge of data structures and algorithms . . . It left me feeling jaded, but I really wanted this to be my career so I stuck it out,” he said.

McManus had to seek outside sources to increase his training, which included a coding bootcamp. He was convinced that if he had received the B.S. in Computer Science originally, he would not have needed to pay for additional training.

“If you’re looking to get into Software Engineering, the curriculum of the CIS major isn’t enough regardless of your track. I think Baruch should definitely consider it if they find that there’s enough interest,” McManus said.

In order to understand how students feel about the major, The Ticker conducted a survey, to which 29 students responded, asking about their thoughts on the potential computer science major.

The survey found that 82% of students believe Baruch should add the major and 79% would greatly consider choosing it as their major if it was offered at Baruch.

Of the 20 students with a CIS major who responded, 65% would consider switching over to computer science. One respondent had expressed regrets that they never would have the opportunity, since they have completed most of the courses for CIS.

Unfortunately, Horczak feels that regardless of survey results, Baruch faculty have expressed disinterest in adding the computer science major due to lack of infrastructure, budget concerns and maintaining the college’s focus on only business courses. However, he said he has not given up hope.

“I believe we should add the major, because I have seen just interacting with students that there’s great interest within it as a public institution,” Horczak said. “Our goal is always to help students achieve their academic interests. If students are interested in a computer science major at the school, I see no reason for the administration to withhold them that privilege of learning or experiencing that major.”

In the meantime, Alsabahi encouraged CIS students to join the AIS club so they are not limited by their major. AIS hosts weekly meetings including hackathons, expert seminars and career events.

“We are here to help empower students to choose their fate than to be assigned one,” Alsabahi explained.