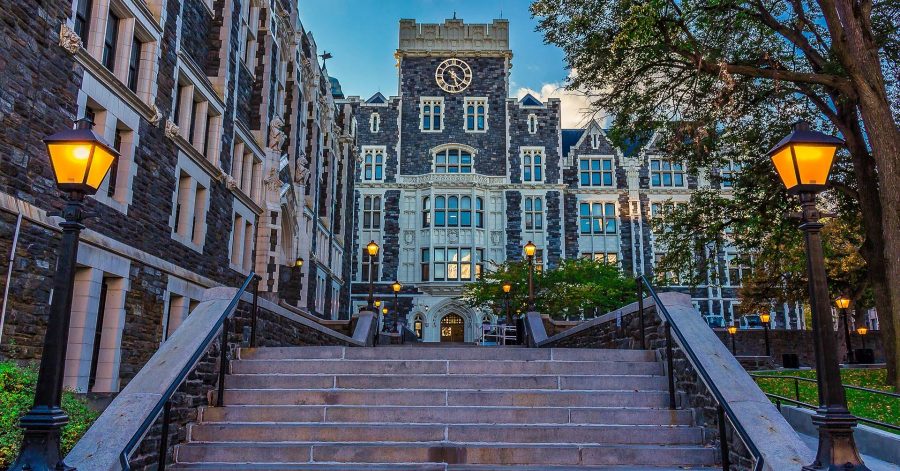 In preparation for remote learning this fall, Baruch College set forth a set of policies that outlined what is and is not acceptable for professors during synchronous online classes. However, there are professors who are not adhering to these rules.

These rules were made public back on Aug. 21, a few days before the Fall 2020 semester began, on the Office of the Provost’s website.

A post titled, “Some policies regarding recording classes, attendance, and online proctoring,” can be found tucked away in the “Messages from the Associate Provost” page of the site.

Right at the top of this article, it clearly states that faculty cannot require students to turn on their cameras or risk punishment, and that professors may not “sanction” students who do not attend class.

As for faculty not being allowed to force students to run on their cameras during synchronous remote lectures, one professor told The Ticker that he supports this policy.

“I fully support this rule,” political science professor Till Weber said in an email to The Ticker. “No institution should have the right to operate cameras in people’s private homes — and certainly not institutions under control of the government, such as public colleges. While professors may use positive and/or negative incentives to encourage camera usage, this effectively undermines students’ rights. I believe that this is insufficient, because it penalizes students who have privacy concerns.”

Weber went on to explain how requiring students to turn on their cameras isn’t just an invasion of privacy but can highlight inequality among students that they do not wish to put on display.

“Camera usage also has a strong inequality aspect,” the professor continued. “Not all students can afford a “presentable” space without other people running through the picture. Some students have to take care of babies or children during class. Some have to share limited internet bandwidth with siblings. And so on. Incentivizing camera usage puts those students in a difficult position who already have enough on their plate.”

In terms of attendance not being mandatory, the website credits this to Baruch being a “non-attendance taking institution.”

“Institutions that the government designates as ‘attendance taking institutions’ are required to take attendance at every meeting of every class and to report the results to the government regularly,” the article says. “CUNY colleges are not so required; hence, Baruch is part of a ‘non-attendance taking institution.’ We may take attendance or not, although we do have a requirement at the beginning of each semester (during the Verification of Enrollment period) to report on students who have never attended the class or shown evidence of membership in the class. (‘Membership’ could be evinced, for example, by turning in assignments.) Members of the faculty may set their own attendance policies but may not ‘drop’ students from a class.”

With this policy, professors are not allowed to fail students based on poor attendance alone if they hand in all assignments and take their final exam, even before the pandemic.

This semester specifically, though, the policy is being applied to synchronous online classes, such as those over Zoom or Blackboard Collaborate Ultra. Professors are not allowed to penalize students who don’t show up to class.

Other policies include that while professors are not required to record their synchronous lectures, if they choose to do so they cannot film students without their consent.

“Instructors are encouraged to record their online lectures and make them available for students to access asynchronously,” the article reads in part, explaining that class recordings should be for the students’ benefit. “No one is required to record his or her lectures. When they are not recorded, alternative means for students to learn the material should be provided. These might include, for example, access to the instructor’s notes/slides or other materials.”

As a result, professors have to tell the students that the remote meeting would be recorded and that if anyone is not comfortable with being recorded visually and/or auditorily, they should not turn on their cameras and should use the chat function to communicate during class.

“Students who participate in this class with their camera on or use a profile image are agreeing to have their video or image recorded solely for the purpose of creating a record for students enrolled in the class to refer to, including those enrolled students who are unable to attend live” is a message professors are expected to provide to their classes before recording lectures. “If you are unwilling to consent to have your profile or video image recorded, be sure to keep your camera off and do not use a profile image.

Likewise, students who un-mute during class and participate orally are agreeing to have their voices recorded. If you are not willing to consent to have your voice recorded during class, you will need to keep your mute button activated and communicate exclusively using the “chat” feature, which allows students to type questions and comments live.”

However, not all faculty members seem to be following these new policies to a ‘T.’ Recently, The Ticker became aware of a post on the Baruch College subreddit on Reddit that showed a screenshot of an email from a Baruch professor to their students. In the email, the professor tells their students that turning their cameras on for this particular course is mandatory.

“I am rather disappointed at how few students are showing video during the lecture,” the email reads. “It’s gone way down since the start of class and it is unacceptable. Therefore, do me a favor and: either start showing your video during class, or send an email to me at [professor’s Gmail] explaining why you cannot show video. This will begin a conversation, and I will try to come to some accommodation with students who truly have an obstacle to showing video. If I do not receive this email, I will ask you to turn your video on.”

The Ticker has not been able to confirm the validity of this email, as the creator of the Reddit post was unable to be contacted.

Supposedly, this class is THE 1041 – Introduction to the Theatre Arts. The professor’s name is mentioned later down in the thread, but The Ticker will not be mentioning their name out of courtesy since this information is unconfirmed.

A search of the professor’s name with “Baruch College theater department” did not bring up many results, making it questionable if the professor is really even teaching this semester.

In any case, this post voices an issue that is popping up for a number of students.

The Ticker put out a survey asking students to share their experiences with professors who are requiring them to put on their cameras or who have attendance as mandatory of their syllabi.

Many students felt uncomfortable sharing their experiences with the situation, as it could get them or their professors in trouble, but a few students responded to the survey, explaining that some professors have required either attendance or cameras, or both.

One accounting major who requested to remain anonymous said that at least one of their professors requires both the camera and attendance.

“They want to take attendance with cameras and keep asking us to put it on,” they said.

Another student, senior Diana Kesler, said that she believes her professor requires both attendance and cameras to be on because “they want [it] to feel like a real class.”

This echoes some of the responses to the subreddit post about the theater professor. Some on the thread side with the professor and make similar arguments to Kesler.

“I mean this is their job, they went to school for 6+ years to teach to students, I think it’s a passion for most of them,” one user responded. “Why would they want to speak to a bunch of boxes with names in it? Is it really that big of a deal to turn your camera on? He or she isn’t penalizing you either, so I wouldn’t go out of your way to report the professor.”

Others, on the other hand, seemed to feel that the professor was invading their students’ privacy.

“They cannot, under any circumstances force you to turn on the camera,” another user replied. “It’s been addressed already. If I was in his class and was petty enough, I would find that information, screenshot it, pasted it into email, CC’d the entire class and the chair department and let him have it. It’s a damn theater elective class.”