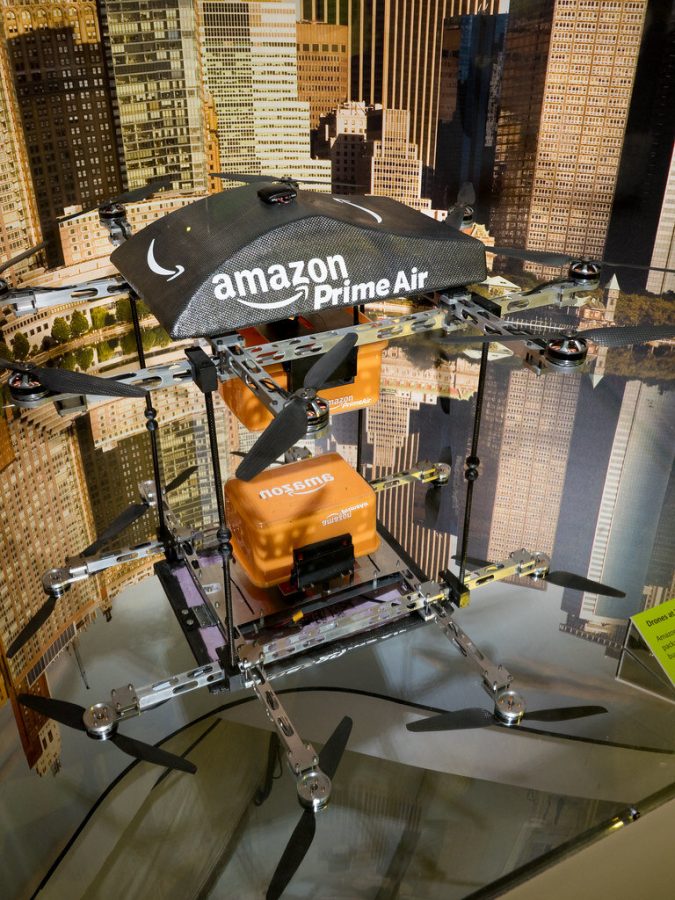 The Always Home Cam comes with a dock for the propeller-driven camera to charge in. The device is designed to fly around the buyer’s home, but only in the path they preprogram it to move in.

The drone “only records when in flight; when it’s not in use, it sits in a dock and the camera is physically blocked,” according to Amazon.

The Always Home Cam’s camera is meant to only record when it leaves its dock. As the trailer for the camera demonstrates, the Always Home Cam emits a loud humming sound to notify the user that the device is recording.

Similar to Amazon’s Alexa, the Always Home Cam is able to recognize nearby objects and avoid them. If it is unable to complete its flight, the camera returns to its dock and alerts the owner.

Although the camera itself comes with HD livestreaming and takes an hour to charge, it only has a five minute runtime. The incremental time, however, was intentional to ensure it’s used as a “purpose-driven security camera.”

Evidently, Amazon has extended its jack of all trades business into security. From cameras for mailboxes, cars and even speakers, this home camera is the latest in Amazon’s surveillance technology.

The company began to delve into this industry in 2018 when it bought Ring. At the time, Ring was an independent security company that faced criticism for its controversial practices.

Last year, Ring received backlash for their app called Neighbors. The app allowed owners of Ring surveillance technology to upload videos from their devices to alert police of crimes.

This exchange in footage between homeowners and law enforcement sparked several concerns about privacy and public safety.

Law enforcement could run footage through facial recognition technology and do extensive searches without any warrants. The practice could even result in misidentifying an innocent person as guilty of a crime.

“While providing secure cloud storage does not appear to pose privacy threats, providing a package of technologies that includes powerful surveillance tools like facial recognition and doorbell cameras, plus the capability to pool data into a massive database and run data analytics, does create very real privacy threats,” Franklin said.

Others in the tech industry agreed, believing the mailbox camera’s purpose was more for government surveillance rather than the safety of the user.

Amazon, however, did not heed Franklin’s concerns. It only perpetuated privacy concerns by creating the Always Home Cam. Though Amazon took measures to mitigate a potential breach of privacy, such as controlling the camera’s path, it is not yet approved by the Federal Communications Commission.

Due to this, consumers are hesitant to trust the product. “The Ring Always Home Cam is far too real-life Black Mirror to exist and will probably never actually come out,” tweeted Twitter user Patrick O’Rourke.

Euro Weekly News corroborated this sentiment, calling the camera a “spy in the sky.”

Despite the public’s distrust of the Always Home Cam, Amazon stands with its latest invention.

“We believe our customers — including law enforcement agencies and other groups working to keep our communities safe — should have access to the best technology and believe that cloud services can materially benefit society,” Amazon said in a statement.

Amazon’s The Always Home Cam is like any other security camera, with the exception that it can fly. Hence, like any piece of technology, it is susceptible to being hacked.

Security camera hackings have increased as they become more widely used, and Ring’s technology has not been immune to this in the past. These hackings lead to a loss of comfort in one’s own home, as well as open the door for dangerous scenarios to play out.

With the Always Home Cam yet to be federally approved and Ring’s sketchy record with home security, consumers are wary of Amazon’s Orwellian product hitting the market in 2021.