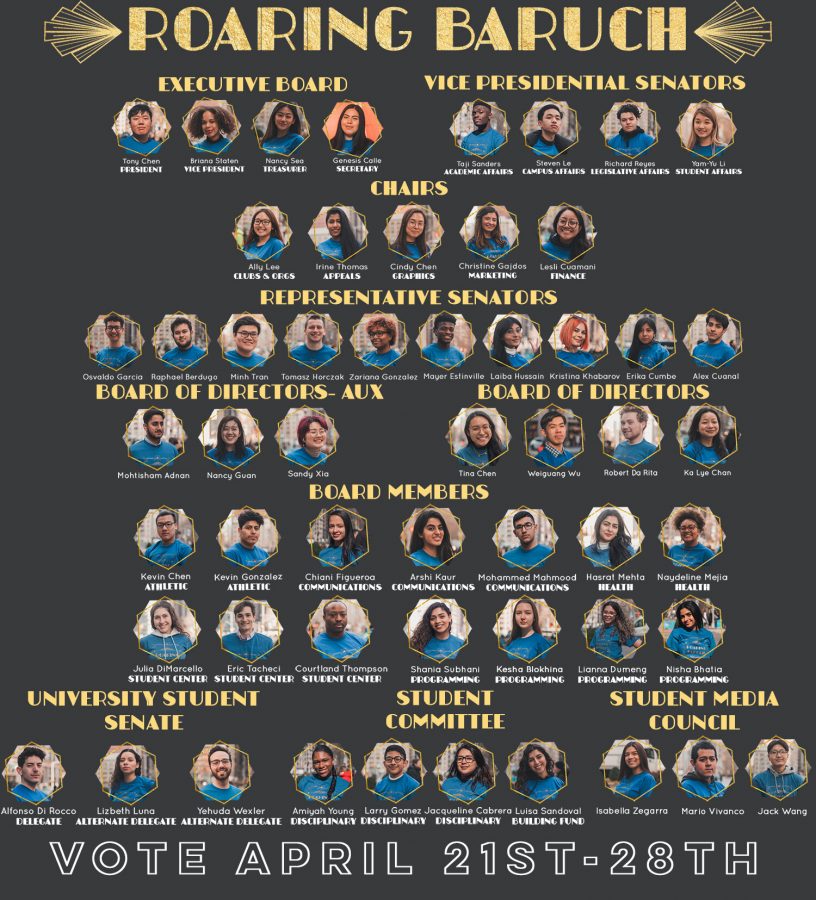 Baruch College’s Undergraduate Student Government election, which was held fully online this year due to the coronavirus pandemic, resulted in a sweep for the only participating party: Roaring Baruch.

Since students were not able to go to school due to the pandemic and statewide social distancing orders in place, students were asked to vote this year online through their MyBaruch accounts.

Roaring Baruch, whose slogan is “Passion, Action, Wit, We’re It,” won this year’s election with ease. With 361 total votes, the results on May 1 were the following:

Chen said that due to the current emergency situation, Roaring Baruch expected a low turnout. Their goal was 300 votes, so getting more was a success for them.

“We predicted that the voter turnout is going to be low if there is no in-person campaigning and election being shifted online, so I have to really thank our marketing, graphics chair and everyone that contributed ideas in raising the voter’s turnout to the best of our ability,” he said.

De La Cruz, an incumbent, said he is encouraged by his reelection.

“Especially under this time of crisis, winning this election is an affirmation of the satisfactory work I and members of USG are delivering under this time and tenure,” he said.

Luna told The Ticker that as a USS Alternate Delegate, her main goal will be working on voicing lowincome student needs.

“I am planning to work alongside the main USS delegates and assist them with initiatives like fighting for tuition freezes and advocating for free Metrocards to low income students,” she said.

The Athletic Board members are Kevin Chen and Kevin Gonzalez.

The Board of Directors for Auxiliary Enterprises Corp. members are Mohtisham Adnan, Nancy Guan and Sandy Xia.

Ka Lye Chan, Tina Chen, Robert Da Rita and Wei Wu have been elected as members of the Board of Directors for the Baruch College Association, Inc.

For Figueroa, winning not only means fulfilling her responsibilities on the Communications Board, it also means encouraging the student body to get involved in student government.

“One thing I encourage students to do is get involved in USG. Being elected isn’t the only way to be a part of it. You can join committees and find your place in it, have your voice heard and help to uplift the voices of other students,” she said.

The Faculty and Student Disciplinary Committee will seat Jacqueline Cabreera, Larry Gomez and Any Young.

The elected Health Advisory Board members are Hasrat Mehta and Naydeline Mejia.

Roaring Baruch has various plans they hope to put into place as soon as school resumes. For now, they’re excited to have won the election and are looking hopeful for the future.