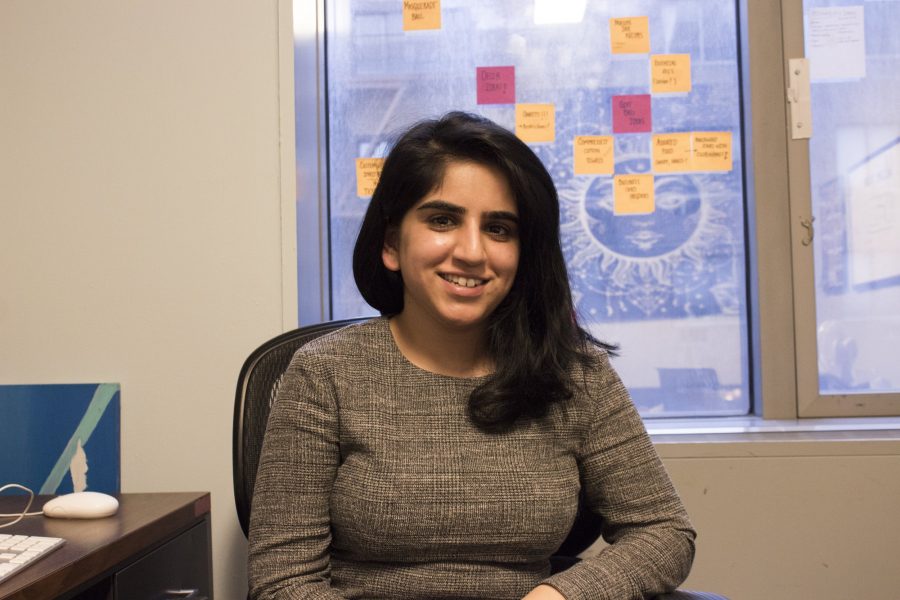 In response to the resignation of Mark Vilk late last semester, Baruch College’s Undergraduate Student Government has elected a new vice president of legislative affairs to take his place for the spring semester: senior and political science major Navjot Kaur.

In an interview with The Ticker, Kaur stressed that she wants to use the position to help Baruch College students become more civically minded and engaged. Under her, students can learn how to run for their community board, how to talk to their local council member, and what zoning laws are. She also wants to encourage more students to vote.

“I think that high school has not done us justice,” Kaur said. “The civics classes are very poorly managed. They are just regurgitating American history but they’re not really telling you these things. So I feel like I’m filling the gap at least for Baruch students.”

Executive Vice President Emma Jorgensen said in regard to Kaur’s position, “Her most current plan is to register as many voters as possible for the upcoming NYC Public Advocate election,” adding, “she has started pushing for this at our USG events.”

At USG’S “largest event so far this year, Neon Night, Navjot got up on stage and announced the upcoming election. She also had a table set up outside the room. This drive is exactly what we have wished for in a VP of Legislative Affairs,” Jorgensen said.

Kaur also wants to create an instruction manual for her position by the end of her tenure, so future legislative affairs members have a guideline that can be easily followed. Kaur is comfortable with local politics, having served on local political campaigns in her native Queens and in an assembly member’s office. She has also worked for nonprofits and has done work at the United Nations.

“Navjot was a wild card when we elected her; she had amazing experience but none of us had known much about her prior to electing her,” Jorgensen said. Before transferring to Baruch in 2017, Kaur attended the Borough of Manhattan Community College. She was involved with the Hindu Student Association and the United Sikh Association when she first transferred, but only recently decided to join USG despite her outside experience in politics.

“I thought to myself last semester when this position opened up, I was like ‘I want to spend like [the] one semester I have left to make sure that I learn what student government offers to students,’” she said.

Kaur was involved with lobbying for CUNY on a greater scale, bringing knowledge of state politics and the CUNY Board of Trustees to the positions. She spoke of the divide between the board of trustees and students, especially during hearings where students and staff are allowed to present a brief speech to the board, which usually addresses concerns that they have about specific aspects of CUNY. She said that sometimes board members won’t even look at the person testifying.

“Those meetings are very emotional for me. That’s why I don’t go sometimes, because it’s frustrating to me that I feel like I’m shouting into an empty space,” she said.

She has also lobbied for CUNY in Albany with the public education interest group NYPIRG, which has a presence on some CUNY campuses. She said, however, that not much advanced on her lobbying trip because there weren’t enough students.

“CUNY had a tuition freeze in 2016 … And you know why? Because people showed up,” Kaur said.“Lawmakers have told me sometimes that they are loath — I hate to say this, but they are loath to listen to students because we don’t show up in numbers. They look at numbers like how many students actually bothered to take time out their day to come talk to me about this.”Besides educating students about civics and CUNY, Kaur wants to support more women in Baruch who want to become involved in politics, saying that she herself has experienced sexism during her work.

“I believe there needs to be a reformation in the way that we view women leaders,” Kaur said. She continued by saying that she is proud that USG’s top leadership are women. She ended the interview by urging students to vote during the special election for New York City public advocate on Feb. 26. Though she doesn’t endorse any political candidates, she advocated for students bringing lots of friends and to maybe even “vote and chill.”