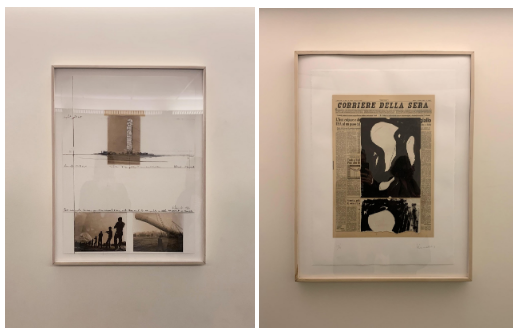 This work, “5,600 Cubicmeter Package,” was then the largest inflated structure without a skeleton. The piece involved 2,000 square meters of custom-made fabric and 3,500 meters of rope. In an interview about the phallic-looking object, upon being asked what this sculpture might be, Christo answered seriously, “it’s an air package.”

Christo, born in Bulgaria in 1935 as Christo Vladimirov Javacheff, had been wrapping small items since early in his artistic career to “explore the transformative effect fabric and tactile surfaces have when wrapped around familiar objects.” It was not until after Christo met Jeanne-Claude — born Jeanne-Claude Denat on the same day as Christo — that the couple began creating monumental, site-specific and tactile artworks together. They paid for their installations themselves through the sale of Christo’s preparatory studies, early works, and collages; “5,600 Cubicmeter Package” cost the pair around $25,000. The artists claimed that each of their artwork pieces existed in a “software” and “hardware” period, with the “software” period involving a struggle with bureaucracy to realize the project. During this time, which once lasted a lengthy 26 years during the installation of The Gates in Central Park in 2005, the pair fought for permits and permissions. The “hardware” period, when the actual art was installed, lasted for as few as two weeks.

One such preparatory work sold to fund projects like the “5,600 Cubic Meter Package” can be found in Baruch’s art collection. “5,600 Cubic Meter Package – Project for Documenta 4, Kassel” hangs on the seventh floor of the Newman Vertical Campus and was purchased as part of a portfolio titled For Joseph Beuys, a collection of works published in the influential artist Joseph Beuys’ memory.

Several other works from the portfolio hang near the Christo collage, including Imi Knoebel’s “Untitled” and Jannis Kounellis’ “Edizione Notturna.” According to Jörg Schellmann, the director of Edition Schellmann, which published the Beuys portfolio, Christo included “5,600 Cubic Meter Package – Project for Documenta 4” because the photo in the lower left of the composition, which shows men pulling Christo’s Package, includes Joseph Beuys.

The placement of Kounellis’ “Edizione Notturna” next to Christo’s “Package” allows some parallels to be drawn between the two artists. Kounellis, born in Greece in 1936, moved to Italy in 1956 and became a prominent member of the arte povera movement. The movement, so-called for its use of poor, throwaway materials such as twigs and detritus, was most active from 1967 until 1972.

This 1987 collage echoes the movement’s critique of exalted traditional materials such as oil, canvas, bronze, and marble, and especially denounces art’s sacredness through its creation. Schellmann, in an email to the author, related that upon his visit to Kounellis’ studio, the artist “took a drawing that he felt was appropriate for the subject, tore it in two parts (‘sacrificed’ it) and placed them on the newspaper of that day. He then asked me to buy 100 of this issue of the newspaper (for the edition) and to have the two-part drawing printed.”

Christo and Jeanne-Claude’s installations were expensive, monumental projects that created and transformed environments. Their work highlighted beauty in nature through brief installations that, like rainbows, begged to be seen quickly. Kounellis’ work, while often also transformative, was generally made with cheaper materials and displayed mainly in interior spaces, most famously when he displayed 12 living horses in a gallery.