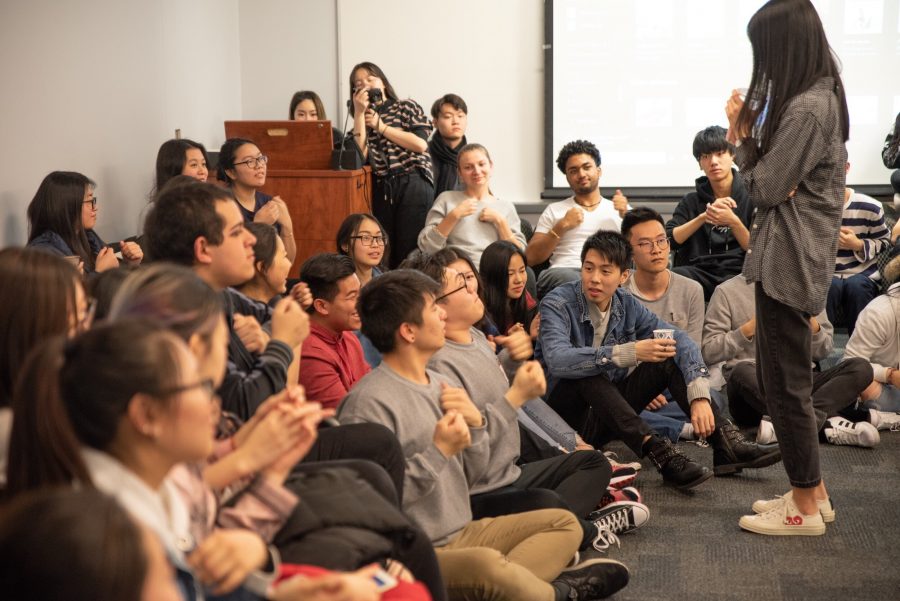 A few students left the room and then came back in to decide who everyone was following based on gestures and goofy movements that were being started by the leader. The third game played was a mix of charades and telephone.

And finally, the night ended on a game of full-body Rock, Paper, Scissors. While some games garnered more excitement than others, the night seemed to be an overwhelming success.

For the majority of the night, there were not enough seats for all attendees. UCLA members said that they could not have asked for a better turnout.

Even though the event was crowded, there was a general consensus among the attendees that this game night was better than the one UCLA hosted last semester, because that one had been unbearably hot. This time around, the heat was not running and everyone was happy.

“This one was more fun because there were just more people in general, and I think because everybody had exams this week and it’s kind of over and it’s a Thursday, everybody’s more relaxed,” said first-year attendee Minami Tanaka.

The event went on for as long as UCLA had the room, and by the end, it was essentially a dance party. There was a good energy throughout the duration of the night and a definite sense of community.

“Everyone that comes in, we want them to feel like they’re in a family,” UCLA member Ellisen Wang said, who was also part of the committee that put the night together. “Baruch is a commuter school and it’s really hard to make friends so one of our big goals is to bring everyone together and I think game night is a really fun, casual, no pressure way to just have everyone get to know each other and build friendships and bonds.”