Tech giants Amazon and Microsoft compete over the cloud 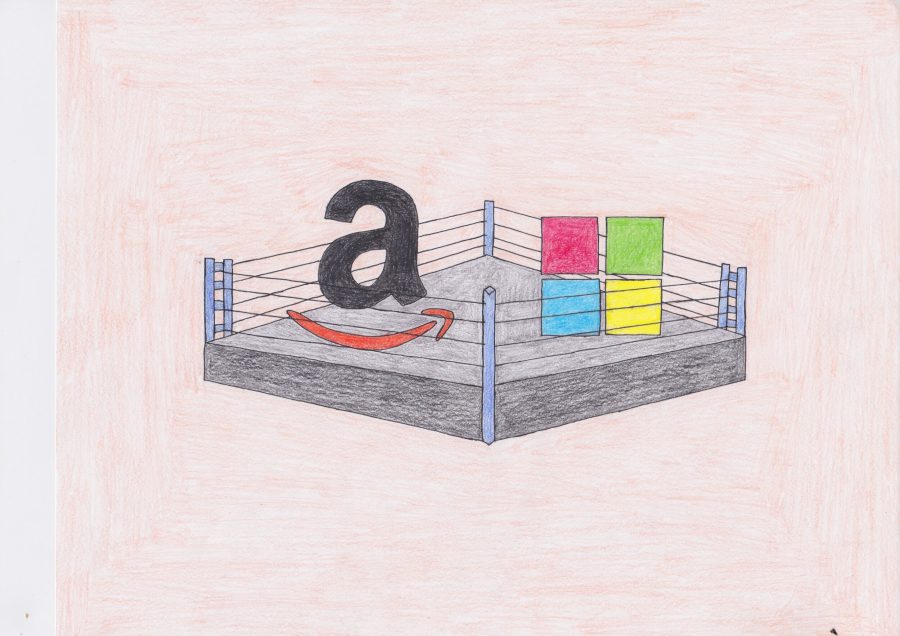 Companies can use SaaS to purchase apps for their employees to use.

In SaaS, the fundamental app software, data, security and database management tools are the responsibility of the service provider.

An example of SaaS is the Google G-Suite, which gives users the ability to access data remotely, while maintaining an increased level of cost-effectiveness.

The second service provided by cloud computing is the platform as a service.

Platform as a service, or PaaS, does not offer connected applications and programs.

Instead, it offers a framework that allows for the full actualization of the web application development cycle process.

Users can build an app, test it, deploy it, manage and update it to their specifications. PaaS can cut coding time and increase usability by developing products for multiple platforms at once.

Finally, the third service is infrastructure as a service, or IaaS. IaaS provides two necessities to any company: security and storage. A computing service provider will assume responsibility of the IT infrastructure in relation to data such as servers, firewalls and a physical data center when necessary.

This leaves the host company free to apply their own software, operating system and technology if desired.

IaaS is coveted for its ability to eliminate the overhead costs that information technology is burdened with.

IaaS — and to a lesser extent PaaS — is the battlefield in which Amazon and Microsoft seek to take control of the cloud. Amazon Web Services and Microsoft Azure are the two most popular suppliers of platforms utilizing the cloud.

In fact, Microsoft Azure is the most used cloud services provider, according to a survey conducted by Goldman Sachs for technology executives at large companies.

In addition, Azure has grown tremendously, with 59% revenue growth in the first quarter of 2020. However, Amazon Web Services leads in terms of revenue, generating $9 billion in the same quarter.

Unfortunately for Amazon, numbers are not everything as it lost out on a $10 billion contract with the Pentagon.

The project known as the Joint Enterprise Defense Infrastructure Project, or JEDI, is the Department of Defense’s first significant technological overhaul in two decades and represents a huge step in the modernization of the Pentagon.

The Department of Defense stated in the initial announcement that, “The acquisition process was conducted in accordance with applicable laws and regulations,” and “all offerors were treated fairly and evaluated consistently with the solicitation’s stated evaluation criteria.” Amazon successfully lobbied for Microsoft’s victory to be called into question, on the grounds of Jeff Bezos’ contentious relationship with President Donald Trump.

Because of this, Microsoft’s work on the JEDI project has been halted by a federal court order.

The cloud is estimated to be the source of a trillion-dollar industry. The next generation of technological efficiency and innovation relies on the development of the cloud. Because of this, there is immense competition for the future of the cloud.

This is not a surprise in the realm of technology as there are always battles for different market shares. Companies and applications are always either attempting to create their niche in the cybersphere or to become the pre-eminent program amongst users.

In addition, there are instances in which technology can be used as a proxy way for politicians and important figureheads in the technology industry.

Therein lies the agony and the ecstasy of the internet, and although all users have the ability to create an application, browser or platform for profit, there is always a significant amount of competition to receive that profit.

While this could be seen as a consummate form of capitalism, there is nothing hypothetical about the impact these battles have for consumers. Individuals and companies can only benefit from the continuous innovation that technology companies can provide.

However, competition in technology should be taken with a grain of salt. Since the two giants of the industry are engaged in a billion-dollar game of chicken, the Department of Defense is unable to adapt their systems to accommodate the ever-evolving technology that could be used to ensure national security.

The consequences of the court battle are yet to be determined, however, the cloud remains ripe for the picking, with no regards to cost.