Energy drinks keep us awake, but here’s what you should know 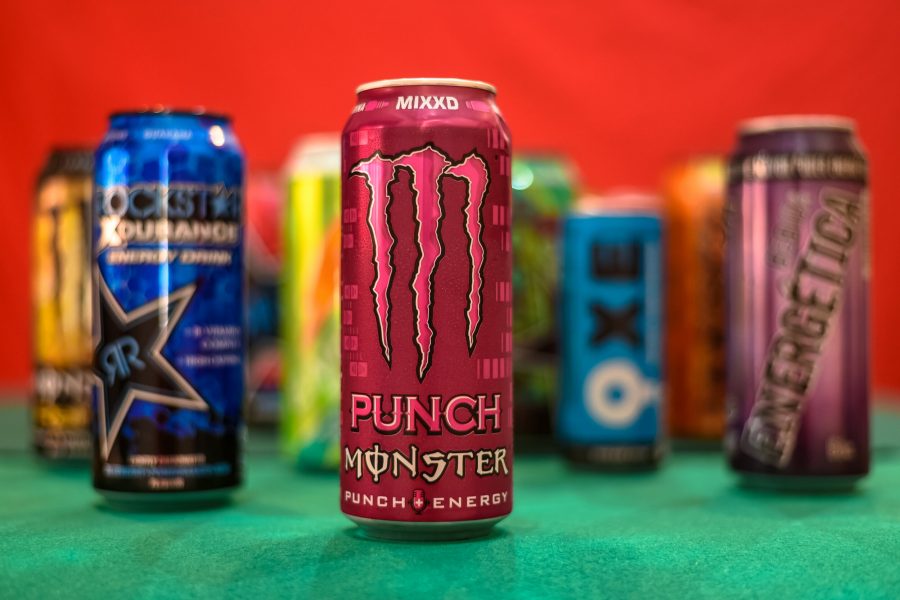 Sixteen-year-old Davis Allen Cripe from South Carolina was in school one day when he started to feel sick. Soon after, he collapsed dead.

Before going to class on April 26, 2017, Cripe drank a large McDonald’s café latte, a large Mountain Dew and an energy drink within a span of just a few hours.

The results of this combination were fatal; Cripe began to have arrhythmia — an irregular heartbeat — which then led to his death.

While this is not a common occurrence, energy drinks and other highly caffeinated beverages have been linked to health issues. An April 2019 study from the American Journal of Preventive Medicine, called “Consumption of caffeinated energy drinks rises in the United States,” found that high school and college students are consuming energy drinks at an increasing rate.

The main ingredients in energy drinks are caffeine, sugar, taurine and artificial sweeteners.

Taurine is an amino acid and its effects on the body are still relatively unknown.

The combination of these ingredients has gotten several drink brands banned in Europe.

Young adults and adolescents were found to have the highest rate of caffeine intake, and that rate is increasing. Middle-aged drinkers, however, were shown to be “leveling off,” according to the study’s findings.

It found that the rate of energy drink consumption for adolescents increased up to 1.4% and up to 5.5% for young adults.

This upwards trend isn’t inherently a bad thing, but it could potentially put more young adults at risk of the negative effects of caffeine and energy drinks, such as what happened to Cripe.

Baruch College professor of general biology and human physiology Pablo Peixoto has studied the energy metabolism and the effects of energy drinks on humans.

He found that these drinks are not beneficial for one’s health, but aren’t necessarily dangerous, when consumed in small amounts.

“One should be aware of the ingredients in energy drinks and consult their doctor, especially if there’s a history of diabetes, hypertension or heart disease as these drinks tend to be enriched in sugars, taurine and caffeine,” Peixoto said.

As for the ramifications of the increase in young adult consumption of these drinks, Peixoto said it is hard to determine the exact implications of consumption, but that they could be linked to hormonal issues during puberty for teens.

“There are studies looking into the interactions of energy drinks with hormones in the context of puberty,” he said. “The results are inconclusive, but point to increased risk of aggression, anxiety and depression, especially if mixed with alcohol.”

He went on to explain that if they are consumed in excessive amounts, energy drinks, especially when combined with alcohol, can increase the risk of certain disorders and that their high sugar content can result in tooth decay.

Despite the publication of studies showing some of the negative health impacts of energy drinks, they are still a common sight in the hands of college students.

John Jay College of Criminal Justice junior Salvatore Trani said that he drinks energy drinks a couple times a week to help him stay alert while doing his daily tasks.

“It most likely is detrimental to my health but I feel it does help towards its intended use, which is to keep me awake through the day, so it’s a necessary evil in my opinion,” Trani said.

This seems to be a common sentiment among some young adults that drink highly caffeinated beverages — it might not be great for health, but it gets them through their day.

“I mean they might be addictive, but they work and do the job,” Baruch junior Kamila Lukyanova said.

“There are many energy drinks with natural caffeine out there that also work.”

Beverage companies and the organizations that support them, however, say that caffeine in drinks isn’t a problem if consumers only drink the amount they’re told to drink on the drink labels.

This effectively blames the consumers who do drink more than a certain amount.

People can consume up to 400 milligrams of caffeine a day, which means they can drink up to two and a half energy drinks a day and still be within a healthy range, according to an article put out by the American Beverage Association, which represents energy drink manufacturers and sellers.

The article says that a doctor — a sleep specialist named Mike Howell — decided it’s okay to have energy drinks as long as consumers don’t drink more than they’re supposed to, though no clear responsibility is taken by the companies.

“Next time you want to enjoy your favorite caffeinated beverage, know that you can do so with peace of mind,” the ABA article states.

Red Bull Energy’s website has an article about the drink’s ingredients. It stresses the innocence of the ingredients, with statements about how caffeine is found naturally in food items such as coffee, tea and chocolate.

It also discusses taurine as a naturally occurring substance found in the body.

“A person weighing 70 kg has approximately 70 g of taurine distributed throughout their body,” the website says about the substance.

“Put another way, a 70 kg person naturally already has in their body 70 times the amount of taurine contained in one can of Red Bull Energy Drink.”

Whether the ABA and drink companies are correct about these drinks, some college students are becoming more aware of the risks of energy drinks and some even said they were trying to cut back on how much of them they drink.

“I drink them once in a while and whenever I do, I’m mindful of the side effects and I feel like people are not mindful about them,” Baruch sophomore Paulo Xu said.

“I’ve had get addicted to Red Bull and he didn’t know about the side effects but once I showed videos of what happened to people who drank it every day, like him, he slowly stopped drinking it.”