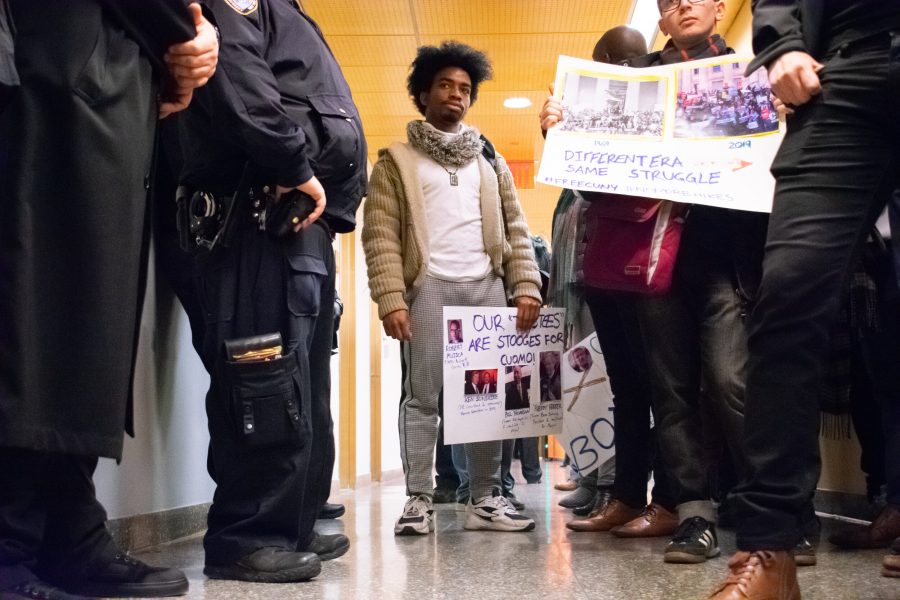 The CUNY Board of Trustees meeting on Dec. 16 was paused due to organized protest chants from the audience against the proposed $320 tuition hike. The meeting took place on the 14th floor of Baruch College’s Newman Vertical Campus, and students and faculty from various CUNY colleges attended the public meeting. After the meeting’s interruption due to protests, the tuition hike was still approved.

The tuition hike included an annual increase of $200 at the senior colleges and community colleges, and an additional $120 fee to generate revenue that will be dedicated to health and wellness services and education at CUNY colleges, as stated in the board’s budget request of the fiscal year 2020-2021.

CUNY students and faculty who were opposed to the tuition hike got organized under the name of Free CUNY, engaging from social media accounts and planning on how to make their presence known and their voices heard at the meeting.

As chants got louder, security started escorting protestors out of the room. However, with more audience members joining the chants, the whole audience was eventually asked to leave. The protestors took their chants outside the room, to the 14th floor hallway. They refused to leave the hallway after multiple attempts from public safety officers to clear out the area.

Brooklyn College student, referred to as only Hailey in order to protect her privacy, was tackled by a public safety officer after refusing to stop chanting despite the warnings. The officer grabbed Hailey’s left hand and twisted it behind her. Soon, another officer came to hold her wrists down, and Hailey was taken to the public safety office. The crowd refused to leave until she was let out of the room, and University Student Senate Chair Timothy Hunter went inside the room, promising the protestors that he will make sure to convince public safety to release the fellow student without charges. Hunter is the sole student voice on the CUNY Board of Trustees.

“Timothy Hunter from USS came in the room, saw that I was in handcuffs, asked questions and proceeded to get upset,” Hailey told The Ticker about Hunter’s reactions to her being restrained. “I was in tears in the room, but when he was upset he was immediately consoled, offered water, and he was told by some of the officers in the room that he had an image to protect now that he was a leader.”

Hailey was told that there was written-up summons for disorderly conduct, but it was not issued to her.

“The entire time this is happening I could hear chants from comrades outside –– demanding I be let out, demanding to know what was happening to me, demanding that cops get out of CUNY — which gave me great comfort the entire time,” Hailey said. “I am sure that it was due to the folks outside holding it down and risking arrest to see that I am safely out that I was uncuffed and not issued a summons.”

After Hailey was released, Hunter was spotted crying while he was leaving the public safety room, heading back to the meeting. Hunter was the only CUNY student who had the right to vote on the proposed hike, and he was the only one to vote against it at the meeting.

Many Baruch Undergraduate Student Government members were in the BOT meeting, mostly showing their support for the protests as well.

“There was a lot of buzz from the Instagram account, @freecuny, and from talks USG had at our open Tuesday senate meetings, USG Secretary Nicole Pung told The Ticker. “We knew as student leaders this was coming. The way the increase was proposed was never fully explained to the students and was vaguely mentioned in their agenda to have this increase allocated to ‘mental wellness for the students.’”

Students are not clear about how this allocation will benefit them and whether it will be worth paying more each semester for it.

“I can safely speak for others when I say this doesn’t tell us how the money is going to be allocated accordingly,” Pung said. “Being left in the dark about issues that directly affect CUNY students is poor communication to say the least.”

In a Facebook post following the meeting, Vice President of Legislative Affairs Kim Kazdal stated, “Felix Matos Rodriguez and the Board of Trustees had the audacity to discuss food insecurity while also aiming to increase tuition. It’s truly hypocritical. You sir are simply a facade and are not an ally of the students.

“The board silenced the voices of the students by kicking us out for peaceful demonstration by FORCE. The Board of Trustees should be ABOLISHED,” Kazdal’s post continued.

There has not yet been a statement in response to the protests released by the chancellor or the members of the CUNY Board of Trustees.

This is a developing story and will receive further updates.