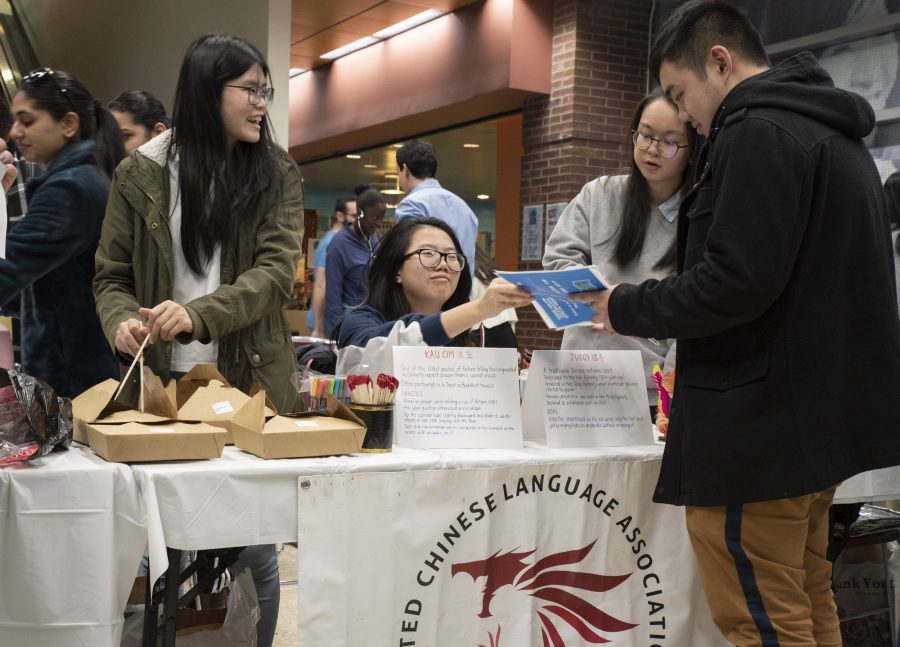 Peter Morgan | The TickerMultiple cultural clubs participated in the fair, both to share culture and to recruit.

One of the goals of the event was to encourage students to learn about the different cultures within the Baruch community.

The diversity within students’ cultural backgrounds was displayed on a large world map in the second-floor lobby where students marked with colored dots to signal where they are from.

“We wanted to make sure that everyone, whether they are a domestic student or an international student, got to know each other and to show everyone the different cultures here,” said ISO club member Shazi Abdusa.

When students got to the second-floor lobby, they received a paper “passport” that got stamped after they visited each club’s table and played their cultural game.

Once they received the stamp from that club, they were given a sample of the food the club brought.

The United Chinese Language Association had shuttlecock, a game similar to badminton and a national sport in China, as well as fortune-telling as their cultural activities that attendees could participate in.

“When we were planning, we were thinking of the kind of activities that we should bring to the event that people would probably not know about or do know about that would still be interactive,” said UCLA Vice President of Graphics Suzy Qiu.

Groups of students formed circles around the tables to play shuttlecock and when the game was over they heard more about the origins of the game within the Chinese culture.

“This event represents Baruch’s diversity and it’s so amazing to see people from different places and be able to relate to them,” said senior Sokhna Gueye, who is from West Africa.

Along with educating attendees on the different cultures within Baruch, the Youth Organization for Israel also wanted to raise awareness of the Israeli culture.

“Some people who want to go to Israel can find out about the trips they can take with a different organization that is available or someone may just go away with thinking that falafel tastes good. At least they know that there is an Israeli community at Baruch,” said Treasurer of YOFI Tejida Wexler.

The Hindu Student Association had word-search activities with words that symbolized India, like Buddha and Diwali.

Attendees not only got to learn about the different cultures represented by the clubs but also got to meet club members and potentially join the club in the future.

“It’s always great when food is provided for students,” said freshman Sharia Hoque, who attended the event because she was interested in the kinds of clubs that were there.

The event gave attendees an outlook toward the different kinds of cultures they could interact with on campus.

“This event brings cultural awareness and represents the different cultures within Baruch to other people,” said senior Kenny Dai, who attended the “Global Fun Fair.”