Bat found in Baruch Statistics 2000 class, unclear where it came from 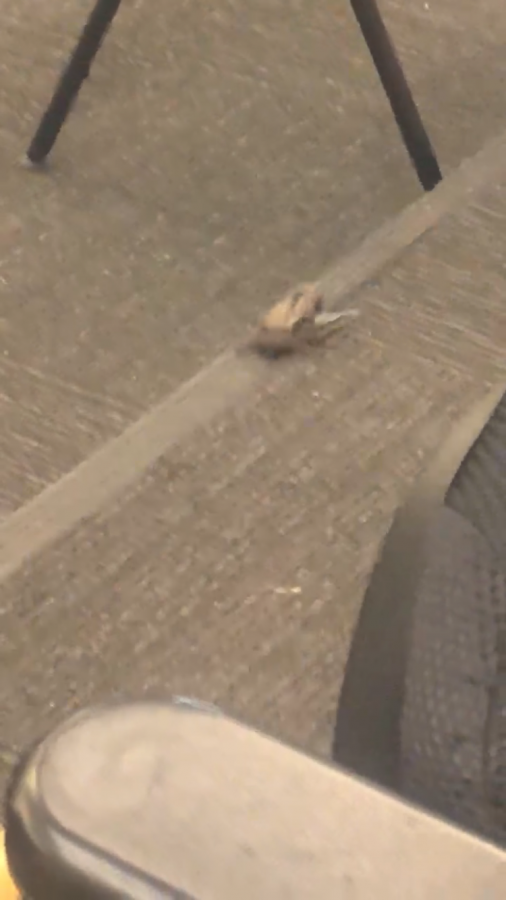 The bat, dubbed "Statbat" by Lukyanova, was found camouflaged with the carpet.

A bat was found crawling on the floor in a Baruch College Statistics 2000 class taught by Professor Prabuddha Ghosh on Nov. 8.

The incident happened at around 9:10 a.m. when the class was just getting started and lasted until around 10 a.m. The bat was stationary on the floor of the second level of the small lecture hall, almost blending in with the grey carpeting.

Students sitting in the second row noticed the bat and brought it to the professor’s attention. Some people said they had initially thought it was a rat when they first saw it. The bat — likely a little brown bat, or Myotis lucifugus, which is one of the common bat species in Manhattan — started to slowly crawl along the floor after some time.

“I was just surprised, because I was like, ‘Is it still alive?’ Because it looks like a rat, but it has like wings,” sophomore Kameron Daniel in the class said.

In a video provided to The Ticker by Kamila Lukyanova, a student in the class, it can be seen that the bat appeared to be disoriented, as it stumbled around unfamiliar surroundings.

It is unclear how the animal had gotten into the classroom or whether there are any more lingering in the Newman Vertical Campus. A few minutes after noticing the bat, Ghosh left the classroom and went to the public safety desk on the first floor of the building to ask for the animal to be removed.

Campus peace officers are not necessarily trained to handle wildlife, so Ghosh said the guard called another facility on campus, who then provided them with yet another phone number to call about the situation.

Afterward, Ghosh returned to his class as the once-a-week class was pressed for time. Both Lukyanova and Daniel said the students made sure to keep the door closed as to keep the animal contained in the room.

By this point, the bat had migrated to one corner of the room and the students moved to the opposite side.

It was still loitering on the floor, so the class decided to ignore it and get into their lesson.

Shortly after, someone from the correct department or office — it is unclear what that office is, though — stopped by the classroom and removed the bat. The Ticker has been unable to confirm the exact way the bat was removed from the classroom.

According to Lukyanova, the person sprayed an unidentified substance on the animal, put it in a bag and used a broom to sweep it into a dustpan. She said the bat had been killed. Ghosh, on the other hand, said he didn’t think the bat was killed, just saying that the handler put it into a bag, then into the dustpan and then taken out of the room.

“We were all actually very scared and then we actually saw that the bat went under the chair and we were like, ‘Okay, it’s not moving.’ But of course, had it been flying or something, I wouldn’t have done the class, because it’s hazardous,” Ghosh said.

“I think we felt safe that, you know, it’s not going to be hazardous. Of course, we kept our distance from the bat. No one was sitting around the bat, I believe, so we were taking our precautions, but we could not have waited, like, one hour for someone to come out of a three-hour class,” he continued.

Some students shared their reactions to the situation with The Ticker, many saying that they had been surprised by it and concerned for the animal’s safety.

“It was just a shock that it was in here and I just, I guess, wanted to take it our as safely as possible,” said sophomore Joey Tang from the class.