Anime Asylum brings a taste of Japan and cosplay to Baruch 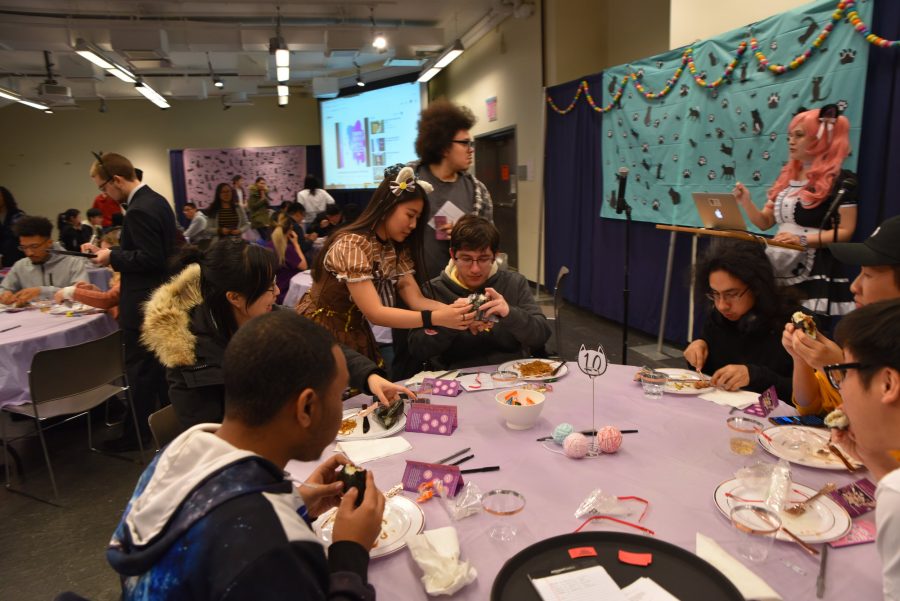 The club was successful in doing this, “I like how interactive the club members are,” said Judy Chen a student at Baruch.

To her the line was long, but when she got in she understood why, seeing all the work it took to serve a table.

Once participants got through the wait they entered the “restaurant” and were welcomed by the butlers and maids bowing, saying in Japanese, “welcome home master.” They were then brought to tables decorated adorably with candy and yarn.

After being seated and given colorful menus, their orders were taken and they had a chance to interact with the butlers and maids. This included chatting with costumers and creating an atmosphere that would be found the maid cafes in Japan.

Butlers were in formal wear, like that a butler would wear, and maids wore maid costumes and wigs. Food included rice dumplings and Yakitori and were naturally were brought to them by the servers.

After being served food, diners were able to enjoy the event, listening to music and talking to the waiters. Guests could leave or participate in games and earn raffle tickets for a gift card and other prizes.

The games were run by club members some of which were in costume from different anime. Games included Connect Four and Jenga, and there was an opportunity to take a photo with your favorite butler or maid. Close to the end of the event they held a raffle.

Japanese Anime Asylum felt that even though it may not be directly associated with anime, it was still something that they wanted to do. In an attempt to bring the Japanese culture, beyond just anime, to the school, the club hosted this event.

In the past the event was hosted along with Japan Club, being that anime is a part of the culture, it was only natural for the two to join together to create this event. This time around they were joined by

The club is described as something that “introduces and promotes Japanese animation to all who share an interest in this style of media.”

“We use Japanese animation as a vehicle to introduce aspects of Japanese and popular culture, history, and language to community in a friendly and fun atmosphere,” as stated on its Facebook page.