Himalayan club celebrates ‘Festival of Tihar’ with food and henna 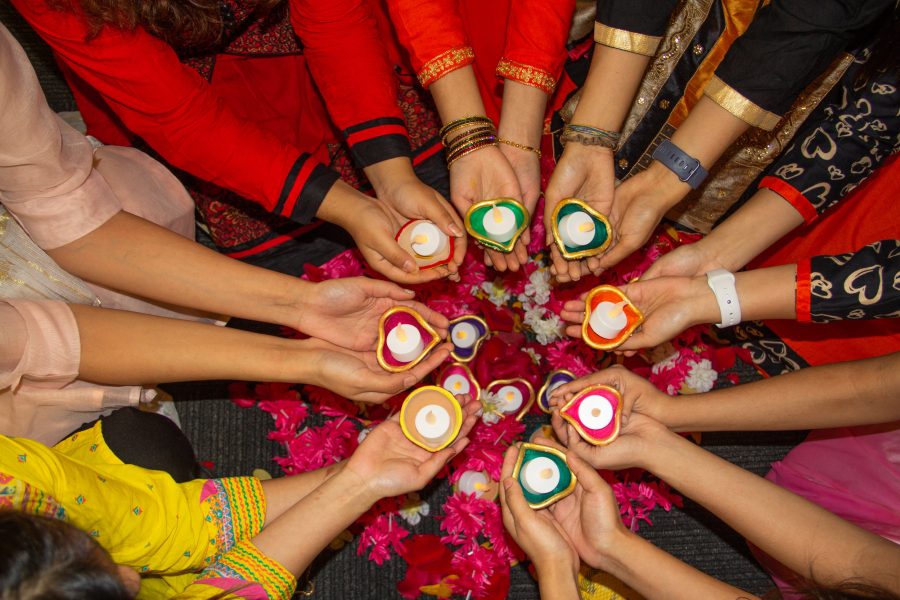 Wendy He | The TickerLatinx culture was on display as Latinx Heritage Month ends with a bang.

Himalayan students from different countries, united by their culture, participated in what was a great turnout.

Members of the South Asian Student Association came dressed in vibrant tunics ready to educate, chant with and feed everyone who stopped by the event, regardless of religious or ethnic background.

During the setup, students hung colorful banners and string lights on the walls.

They placed electric candles on every table and carefully set up a shrine of roses in the center of the room.

Tihar is celebrated by Nepalese people who practice Hinduism, but Buddhist and Christian students at the event explained that Tihar’s Festival of Lights is appreciated and practiced in India and other South Asian countries.

“It is a five-day long Nepali festival celebrated primarily by Nepal, but it doesn’t matter what background you come from,” Chodon explained.

“Whether you’re Buddhist or Hindu, it’s celebrated across borders.”

Tihar’s focus is on prosperity and longevity of the individual, as well as families and life in all forms.

Chodon and Nyangmi also explained that the appreciation of animals is a common theme throughout the festival.

“Latin culture teaches you to open up your heart and be more demonstrative with your emotions,”

Since Southern Asia is largely an agricultural region, its communities feed and pay their respects to animals that contribute to the harvest, such as oxen, crows and cows.

The members then went on to explain the importance of each animal.

Crows kill off pests that would otherwise corrupt and compromise the number of crops yielded. Cows defecate and produce manure, which serves as a great fertilizer and so on.

The last day of Tihar celebrates the bond between siblings.

Nyangmi shared that traditionally sisters, “pray for the long life and prosperity of their brothers, and brothers, in exchange, promise to protect their sisters.”

In addition, brothers will give small monetary gifts to their sisters.

During the presentation, students enjoyed catered traditional Nepalese foods from Woodside Cafe in Queens, such as samay baji, dum aloo, choyla, as well as roasted soybeans, lentils and salads.

Students also tried sel roti, which, according to Chodon is a “homemade ring-shaped bread made out of rice bread, ghee and sugar.”

Sel roti is very popular at this time of the year.

President of the Himalayan Club Shruti Tulagher explained that the celebration of Tihar promotes health, which is why “many different foods are served. Because you want a variety so that your diet is balanced.”

In the middle of the presentation on traditional chants, there was an audio malfunction.

But this didn’t dim the celebrating students’ spirits.

They picked up the chants and encouraged newcomers to clap along.

Afterwards, guests were invited to have henna tattoos drawn on their hands and arms by club members.

Freshman guest Laiba Hussaim explained that henna is done by members of all South Asian cultures.

“I’m Muslim, but as you can see I’m brown, so me and my family do henna anytime we celebrate anything, like weddings, birthdays and holidays,” Nyangmi agreed.

“And even if you aren’t a part of the culture you can still get your henna done,” they added.

“We don’t know a lot of the rituals, but we still try,” Hussaim said. “We ask our Hindu friends and celebrate nonetheless.”

“It’s a great experience to learn about different cultures because oftentimes, there are stereotypes, so coming in here I feel like I’m actually learning and a part of the culture not just judging,” another attendant, Bellody Chan, said.

Tihar has a different meaning for each student, but everyone agrees that Baruch’s celebration bolstered a culture of religious tolerance and inclusivity.

“It’s about coming together. It’s like Halloween, Christmas and Thanksgiving all packed into one,” Tulagher said.