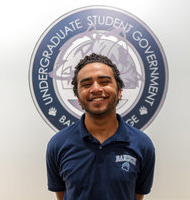 The album’s main focus is answering the question of “[am] I going to do something different or am I going to continue even though I hate who I am right now?”

This is a question that frontman and guitarist Jim Adkins proclaims as “the difference between surviving and truly living” in a post on the band’s Instagram page.

With Surviving, Jimmy Eat World has outlasted many of its emocore contemporaries of the 1990s and secured its spot as one of the most notable groups to come out of that era.

Not only was the band one of the pioneering groups in the scene, with groundbreaking albums such as Clarity, but the Arizona native group were also one of the first to break through to the mainstream with their seminal 2001 release Bleed American.

Since then, Jimmy Eat World has continued to build a diverse discography while never shying too far away from the emocore roots exhibited in its debut.

While the milestone of having ten full albums is an impressive accomplishment for any group, the achievement is even more extraordinary for Jimmy Eat World considering the turbulence the group faced with record labels in its earlier years.

The band members were on the verge of quitting  their music dreams entirely after being dropped by their record label subsequent to the commercial failures of their second and third studio albums, Static Prevails and Clarity, despite the latter amassing a cult following and critical acclaim years after its release.

Faced with the threat of fading into obscurity in 2001, the quartet, with barely enough money to record in a studio, pieced together the aforementioned Bleed American, an album that garnered massive praise and made a breakthrough into mainstream media with songs such as “The Middle” and “Sweetness.”

While the 10 tracks on Surviving do not deviate far from Jimmy Eat World’s usual style of songwriting, there seems to be a shift in the narrative of the songs.

Rather than being amid the emotional ups and downs like it was on previous releases like “If You Don’t, Don’t” and “Work” for instance, the band is now reflecting on past experiences and offering its wisdom on tracks such as “Love Never,” “Diamond” and the title track “Surviving.”

This shift from vulnerability to maturity demonstrates the lyrical growth of the band, one that correlates to the many hardships Adkins has overcome in his tenure of songwriting and performing.

In an interview with Billboard’s Chris Payne, Adkins speaks about how the process of songwriting for him used to be unconscious and how he used to simply be a passenger in his body, “Accepting things about [himself] that weren’t really true.”

Adkins, who is now nearly seven years sober, admits that writing and performing sober is “100% better” and allows him to hold onto a newfound “sense of self-awareness.” This self-awareness is also incorporated into the theme of some tracks, including “Delivery,” “One Mil” and “Recommit.”

With Surviving, Jimmy Eat World stays true to its emo roots throughout, but does get experimental on some tracks, such as the catchy pop tune “555” and the jazz infused outro to “All the Way (Stay).”

Coupled with the usual heartfelt lyrics, the album also has some heavier moments as well, with the fast paced “Criminal Energy,” the standout guitar solo in “Love Never” and the rocking, six minute finale to the album “Congratulations” being some of the best tracks the album has to offer.

Adkins, in an interview with Rock Sound, attributes the heavier aspects of the album to the idea the band had of “less is more” in regard to recording the instrumentation of Surviving. Adkins goes on to say that this mindset is “how [the album] got started.”

Surviving is another noteworthy contribution to a discography that has only grown over the last two decades and has shown no signs of slowing down.

While trying to find what it means to truly live, Jimmy Eat World cultivates a sound and genre that the group trademarked in the early 90s into a set of catchy tunes that treads a fine line between experimentation and producing music that the original fans of the band will love.