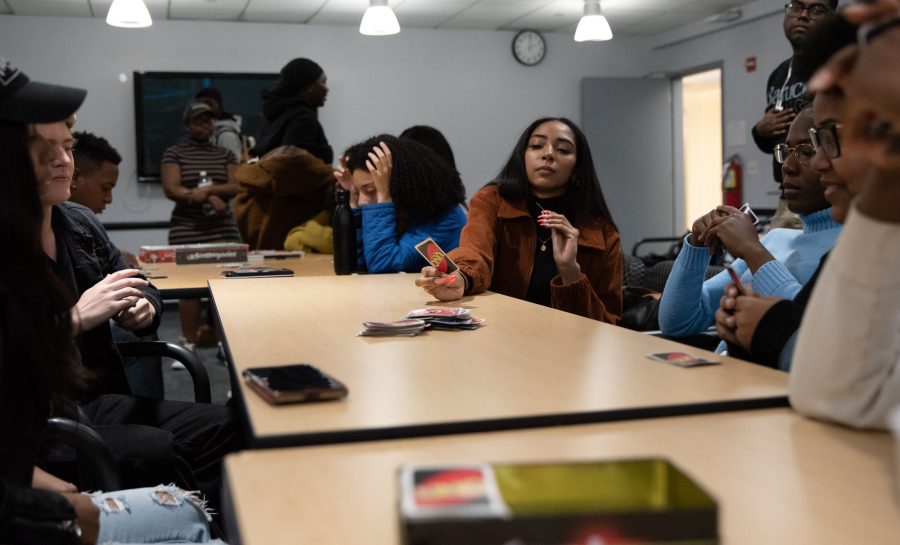 Baruch College’s African Student Association and Student Organization for Caribbean Appreciation hosted “Game Night,” on Oct. 15 to help students have some fun amid all of the midterm-season stress.

The focus of this event was “to give people a chance to de-stress” as well as “to get people to come in and meet new people,” said club member Ryan Shivcharran, a third-year statistics major.

Some of the activities at the event included card games, such as Uno, Spoons and Cards Against Humanity, and extended to other games such as dominos and musical chairs.

Along with the games, hosts catered chicken drumsticks, macaroni and cheese, and beans with rice, which attendees appreciated.

Participants split up into several groups depending on what they wanted to do.

This quickly led to a rather large game of Uno with about eight people.

As more people joined, the group split into to make things easier.

Later it was suggested that the group play the card game Spoons, as it is easy to learn.

Though, due to a lack of spoons, dominoes were used instead.

Spoons is a game where you must get all four cards of the same type from the deck, for example, four aces. Each person will start with four random cards and one person will pick up more cards from the deck.

They can then pass the card to the person next to them, who will also pass down a card of their choosing. This goes on until one person has four of the same, at which point everyone must grab a spoon — or in this case, a domino — from the table. Only, there is one less domino than there are players, and the person who doesn’t pick one up gets knocked out of the game.

This was enjoyed by many students, including Osnan Nat, a senior studying marketing who was at the event to show his support for his friends in the club.

Meanwhile, several others entertained themselves by playing musical chairs, which led to quite a passionate match as the participants were even louder than those playing Uno, which is known to get people “excited.”

As time passed, many switched to playing Cards Against Humanity, which resulted in students creating jokes that are not appropriate for publication.

While many had to head out as it was getting relatively late, there was still a decent crowd towards the end, at which point it was time to start returning the room to its original state for the next day’s classes.

There was even a fair amount of leftover food by the end which was put onto plates and taken home by students.

All in all, Shivcharran said that this annual tradition was a great way to get “away from school” and unwind.

“They don’t have to think about school, and it helps them unwind,” he said.

All in all, Shivcharran said that this annual tradition was a great way to get “away from school” and unwind.

“They don’t have to think about school, and it helps them unwind,” he said.